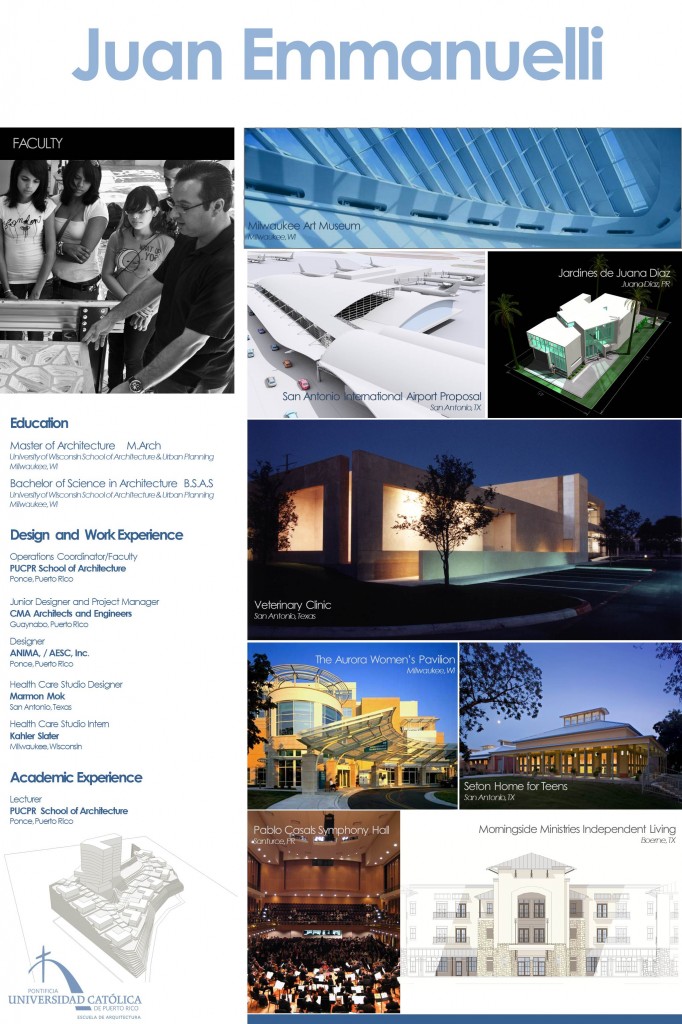 Juan Emmanuelli Benvenuti was born in Mayaguez, Puerto Rico. His interest in architecture and design started at a young age, yet because of special circumstances decided to enroll in the University of Puerto Rico’s Civil Engineering program. After three years, he was invited to join a small group of students for a summer course in architecture at the Interamerican University of Puerto Rico, in conjunction with the University of Wisconsin’s School of Architecture and Urban Planning (SARUP) in Milwaukee. It was this experience that led him to forego his Civil Engineering studies and enroll in a pilot architecture program between these two institutions. In 1994, he relocated to Milwaukee to continue his architectural studies, concluding his undergraduate studies in 1997 and his Graduate studies in 1999.

He was immediately recruited by Kahler Slater Architects in Milwaukee to join the Health Care design studio. He worked on all aspects of the trade and in some the the midwests most advanced and innovative health care projects, including The Aurora Women’s Pavilion and the St. Lukes Cardiac Tower. During this time he wa also drafted to other design studios within the firm, adding to his experience in diverse project typologies and tasks. He was also fortunate to briefly collaborate with the project management team for the Milwaukee Art Museum expansion, designed by Santiago Calatrava , and where Kahler Slater served as Architect of Record.

In 2001, he relocated to San Antonio, Texas to join Marmon-Mok,LLP, one of the city’s most respected A/E firms. There he continued his professional training in healthcare design, with special focus on design for the elderly. He also collaborated with special teams within the firm to develop proposals and designs for large scale projects like the San Antonio International Airport Expansion, in collaboration with Genssler’s Houston office.

In 2005, he returned to his native Puerto Rico after more than a decade abroad. It is upon his return that he joined AESC Development, Inc.  and Anima, Inc., where he collaborated with architect Abel Misla Villalba in several high end residential development projects, as well as master planning for the University of Puerto Rico campuses in Ponce and Aguadilla. In 2008, he moved to San Juan to join CMA Architects and Engineer’s. His experience in technical design and management led him to collaborate in wide ranging projects, from pharmaceutical and industrial to civic and hospitality, as well as construction management on projects like the Pablo Casals Symphony Hall.

Concurrent to his work at CMA, he rejoined forces with Abel Misla Villalba for the planning of the Pontifical Catholic University of Puerto Rico’s School of Architecture proposal, and its subsequent implementation. In early 2009, just months before the School’s scheduled opening, he officially became part of the School’s administration, as Director of Operations, and Faculty as a design studio lecturer.