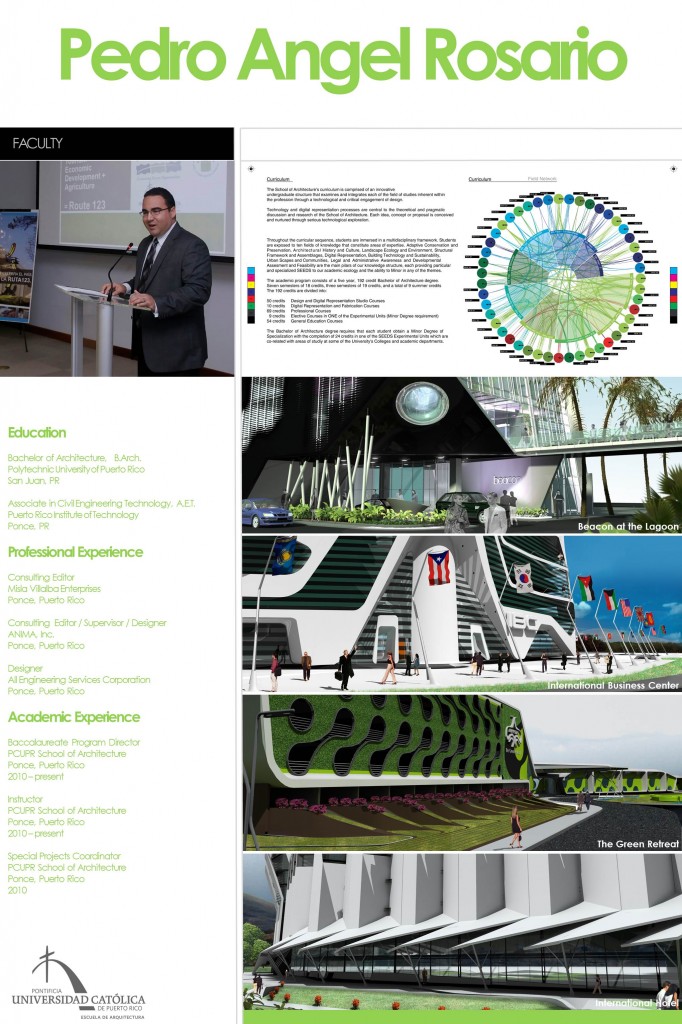 Pedro Angel Rosario-Torres received an associate degree in Civil Engineering from the Technological Institute of Puerto Rico, Ponce Campus, and a professional degree in Architecture from the Polytechnic University of Puerto Rico in Hato Rey.  As a student he had several recognitions which include three honor awards from the American Institute of Architects (AIA), two of these at a national level and one at an international level.  He also got credit for his participation in the project entitled Los rincones de una ciudad: un mapa para recorrer los espacios públicos, paseos y patios de la ciudad (translated to The corners of a city, a map to visit public spaces, walkways and patios of the city), an initiative that received the National Prize of the Colegio de Arquitectos y Arquitectos Paisajistas de Puerto Rico (CAAPPR).  Furthermore, he  has work published in four sections of the book 100 preguntas que nos hemos hecho sobre Puerto Rico en la Nueva Escuela de Arquitectura de la Universidad Politécnica de Puerto Rico (translated to 100 questions that we have made over Puerto Rico at the New School of Architecture of the Polytechnic University of Puerto Rico).  Finally, it can be mentioned that his work was part of the exhibition entitled 10x10x10: 10 años, 10 proyectos, 10 estudiantes, Anexo al Museo de Arte Contemporáneo de Puerto Rico (translated to 10x10x10: 10 years, 10 projects, 10 students, Annex to the Museum of Contemporary Art of Puerto Rico), presented at the facilities.

At a professional level, Rosario-Torres was part of All Engineering Services Corporation (AESC) as designer and project manager (in office and field), working for the Department of Investment, Design and Strategic Planning of the company.  The work performed was directed to promote projects of residential and commercial development, primarily in the Southwestern Region of Puerto Rico.  Later, he joined the team of ANIMA, Inc. under the same functions as in AESC, but adding the supervision of staff and consulting editor duties.  The work performed was designed to propel projects of architectural, urban and technological innovation, both in the public and private sectors, throughout Puerto Rico.

After these work experiences he decided to start a career as independent administrator of proposals for architectural concept development, urban concept development and academic development, all of these focused in architecture.  The work performed has been aimed at promoting strategic alliances and the multisectorial vision of interdisciplinary collaboration in Puerto Rico.  This is, as a mediating solution to the social and economic problematic of the fragmentation of functions and the independence of professions that operate without a holistic reference or a wider vision in the island.  Under this professional scope he managed proposals for the Urbanism and Planning Division of the Southern Puerto Rico Chamber of Commerce (CCSPR for its Spanish acronym), which include initiatives for the Council of Collective Transportation in the South, and The City of Health.

Once the School of Architecture was established, Rosario Torres became part of its administrative structure as Special Projects Coordinator.  Three months later he became the first Baccalaureate Program Director of the School, which is his current position.  His duties include directing the academic component of the program, leading the faculty in the educational process, reviewing the course contents and meet the accreditation process management, among others.  He also participates actively as faculty of the School, teaching courses in architectural design and analysis, history of modern architecture, and dynamic imaging.

In the field of professional publications, Rosario-Torres has credit in the books entitled Behavioral Patterns and Architecture and Cinema – Time + Movement: Architecture, City, Cinema.  He was also credited in the publication entitled Projects of New City Ecology: Threading a New Urban Ecosystem for International Productivity and Competitiveness.  Furthermore, he also has credit in newspaper articles for La Perla del Sur, Caribbean Business, El Nuevo Día, and Area magazine, among others.  On the other hand, as a speaker he has presented the following lectures in Puerto Rico: Academic Structures and the Responsibilities of Teaching; Academic Roles: Retention, Assessment and Cloister Responsibilities; and Iconographic Symbiosis: Relationships of Art and Architecture.  Internationally, as part of the 16th Latin American Congress of the College Board, held in the Republic of Panama, he presented a lecture entitled In Search for a Common Platform: Current Student Generational Realities.